April
15
April 14, 2021, Hong Kong – Gaw Capital Partners is ranked fifth in the PERE’s first global dedicated property technology fundraising ranking, the Proptech 20, which lists the top 20 managers raising funds dedicated to property technology investments globally since 2016. Gaw Capital Partners launched Gaw Equity Growth Fund 1 in 2020 with a target size of US$400 million and closed its first fundraising round with US$200 million.
“We believe that this is the optimal time to invest in technologies relating to the usage of space, which is lagging behind other industries. The adoption of technology is urgently required to improve work efficiency and enhance the user experience, while at the same time, creating value and maintaining market competitiveness for space owners,” Humbert Pang, Managing Principal and Head of China for Gaw Capital Partners, said.
One of the key milestones in Gaw Capital Partners’ proptech investments was its investment in Beike, the leading integrated online and offline housing transaction and service platform in China, which received investment from Gaw Capital Partners in a Series D financing round. The firm successfully listed on the New York Stock Exchange in August 2020.

The Proptech 20 ranking is based on the amount of proptech direct investment capital raised by firms between January 1, 2016 until March 1, 2021. Where two firms have raised the same amount of capital over this period, the higher ranking goes to the firm with the largest currently active pool of capital raised since 2016. If there is still a ‘tie’ after taking into account the size of a single fund, PERE gives greater weight to the firm that has raised the most capital within the past year. 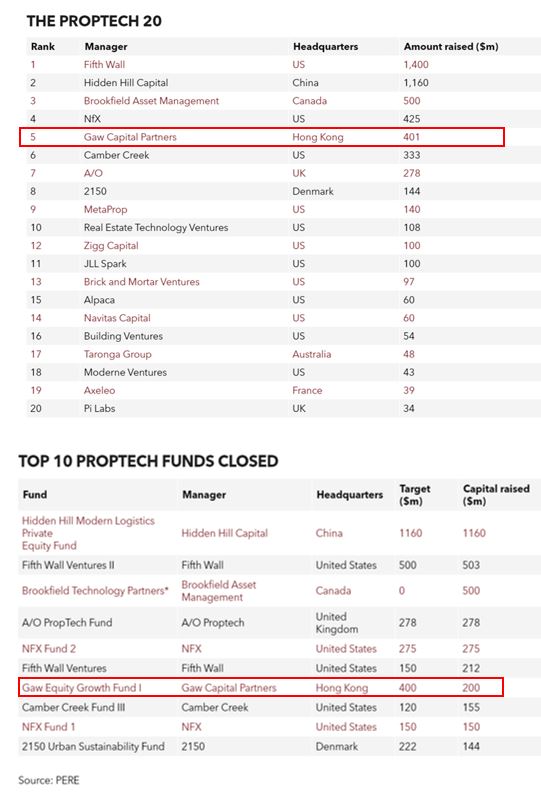